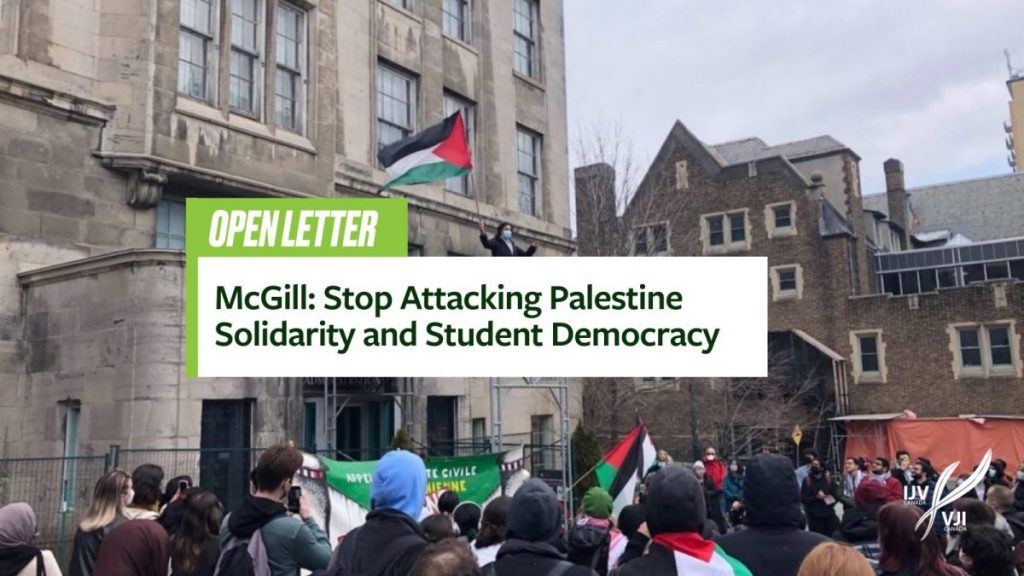 The following is an open letter sent on behalf to Independent Jewish Voices Montreal (IJV) to the McGill University administration on April 7, 2022.

Independent Jewish Voices (IJV) Montreal is an organization of students and non-students from Montreal’s Jewish community.

We stand in solidarity with the McGill students who democratically voted (71%) for the Palestine Solidarity Policy. It’s a blessing to have so many passionate students supporting human rights and social justice, and we commend the Student Society of McGill University-SSMU and Students for Palestinian Human Rights-SPHR for organizing the motion.

We are appalled at the backlash from the McGill Administration and the pro-Israel lobby that is attacking and demeaning your students for supporting Palestinian rights. Every one of your criticisms of the SSMU is predicated on a single fallacy: that criticism of Israel equates to antisemitism. There are many Jews, including those belonging to human rights organizations within Israel, who reject this fallacy. Support for the human rights of a people is never an attack on the human rights of another people.

In a statement released shortly after the vote, B’nai Brith Canada boasted how effectively they pressured the McGill administration to oppose the students’ vote in support of the Palestine Solidarity Policy, and how they support the legal challenges by Jewish students against universities.

In her reply to B’nai Brith, Principal Fortier wrote: “The McGill administration will also take all necessary measures to ensure that our students continue to feel safe and free of harassment, including holding SSMU accountable to the principles and values of its own constitution.” This obviously uses the “McGill model” to personalize how McGill opposed students for voting for BDS in Feb 2016.

As Jews, we feel insulted by this obvious canard, and as human rights activists  we are appalled by how the McGill administration applies a double-standard to which students need ‘protecting’, according priority to the demands of those protecting Israeli apartheid and the violent Jewish colonization of Palestinian land.

McGill Administration chose not to protect Palestinian students from feeling unsafe by joining with CIJA and B’nai Brith in attacking students associated with the SSMU of promoting antisemitism for their BDS advocacy in Oct. 2016.

McGill Administration chose not to protect its own students and professors (many who are Palestinian and Jewish) named by the hateful Canary Mission website dedicated to targeting students and teachers who support Palestinian human rights.

McGill also didn’t protect Palestinian students when faculty and influential supporters co-sponsored, with the Institute for the Study of Global Antisemitism and Policy, Israeli historian Benny Morris’s 2015 lecture defending the ethnic cleansing of Palestinians in 1948 in order for Israel to succeed as a new state.

It is long past time for McGill to stop discriminating against students and staff who support Palestinian human rights.