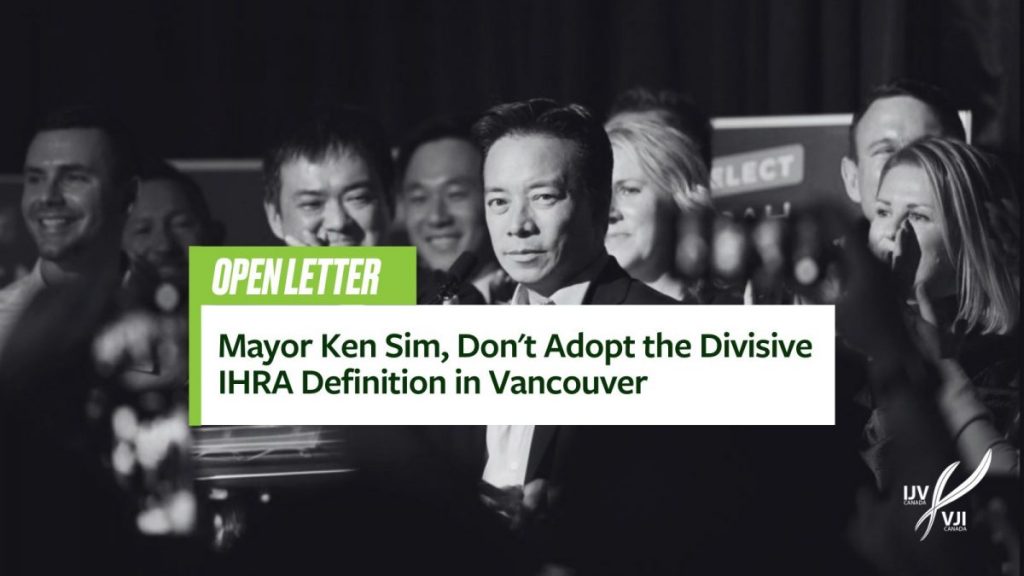 Independent Jewish Voices (IJV) Canada is an organization dedicated to the pursuit of social justice for all. In particular, we extend solidarity to the Palestinian people, who are resisting oppression at the hands of the Israeli government and military. We are writing to express our concern that you intend to endorse the International Holocaust Remembrance Alliance (IHRA) definition of antisemitism.

IJV applauds City Council’s announced intention to fight antisemitism. We are of the view, however, that the IHRA definition serves to deflect attention from real antisemitism by focussing on criticisms of Israel. It does so by adding to the basic definition of antisemitism what it deems to be eleven “examples” of antisemitism – seven of which relate to Israel.

The existence of these examples and the focus on defending Israel have led IJV and a host of other organizations to oppose the IHRA definition. These include the BC Civil Liberties Association, the Union of BC Indian Chiefs, the Canadian Association of University Teachers, 40 faculty associations, the Jewish Faculty Network, and many others. More than 650 Jewish academics across the country having signed a petition urging the rejection of the IHRA.

The Canadian government and a few provincial governments have announced their support for the IHRA, but no major Canadian city has adopted it. Meanwhile, however, an impassioned debate is raging about the validity of the IHRA definition.

The promotion of the IHRA definition is part of a widespread effort to suppress discussion of the Palestinian plight at the hands of Israel. Our organization recently published a report documenting the suppression of free speech in Canada when it comes to discussion of Palestine.

Just last week, the UN Special Rapporteur on Racism, E. Tendayi Achiume, added her voice to those of other IHRA opponents when she stated that “The push for nations to adopt the International Holocaust Remembrance Alliance of antisemitism should be suspended” due to “the controversial status, divisive effects and negative human rights impacts of the IHRA working definition on antisemitism.”

These are not idle concerns. The IHRA definition has been widely used to label as antisemitic those who have criticized Israeli behaviour, including Amnesty International and Human Rights Watch. Both of these respected organizations have characterized Israel as an apartheid state. The definition is so fraught that Kenneth Stern, one of its drafters, subsequently cautioned against its adoption because of the way it has been used to demonize legitimate criticism of Israel.

The IHRA definition raises issues which have been debated in the Jewish community for more than 100 years, issues about which there is no community consensus. For example, many of IJV’s members join with Palestinians and others in condemning Israel as a “racist endeavor” (to use one of the IHRA examples). The basis for this charge is that 750,000 Palestinians were expelled when Israel was founded, that it subjugates the inhabitants of the Occupied Palestinian Territories under military rule and subjects Palestinian citizens of Israel to second class status. The IHRA definition would deem these IJV members to be “antisemitic.” By adopting the IHRA definition Vancouver Council will be condemning some of its citizens as racists and antisemites based on their legitimate political views of the situation in Israel-Palestine. This would be unconscionable.

It is our view that discrimination against Jews must not be treated in isolation from the struggle against other forms of racism. In the recent election, ABC, the party that won a majority of seats, proposed the formation of a Task Force on Racism. We strongly endorse this proposal and would be pleased to participate in such a task force. Let’s fight racism together by joining with members of the Black, Indigenous, East Asian, and Muslim communities, who are experiencing appalling levels of racism and oppression.

In closing, we urge you to reject the IHRA definition.