Convicted or Not, Canadian Neo-Nazi Zeiger’s Ideas Will Not Pass 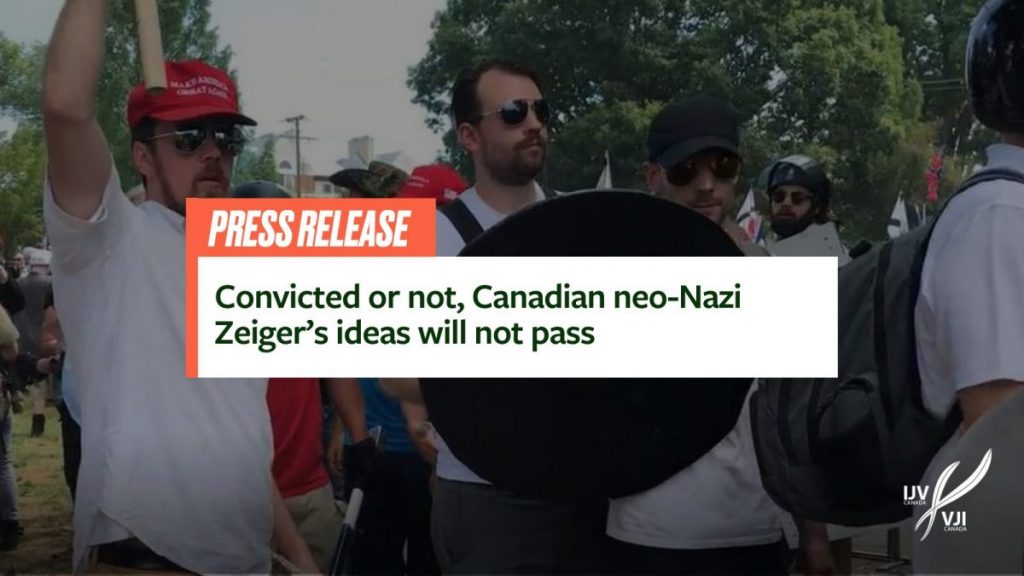 Montreal, July 8, 2022 – As the trial of one of Canada’s most notorious neo-Nazis, Gabriel Sohier-Chaput, wraps up in Montreal today, Independent Jewish Voices Canada (IJV) stands with anti-fascist activists and all people who have been targetted by his hateful ideas and actions. Sohier-Chaput, also known as “Zeiger”, was a leading editor and administrator for the neo-Nazi blog “The Daily Stormer” before being exposed by anti-fascist activists in a series of explosive articles that caught the country’s attention in 2018. The Montreal-resident cowardly fled the city after having his identity exposed, and in 2020 was charged with one count of wilful promotion of hate propaganda. He pleaded not guilty. The trial began with three days of arguments in February, but did not reach a conclusion at that time. The Crown will give its final arguments on the fourth and final day of the trial today.

“Regardless of the outcome of this trial, we need to send a clear message that Sohier-Chaput’s fascist ideology has no place in our society,” says Aaron Lakoff, IJV’s Communications and Media Lead.

Even though Sohier-Chaput wrote between 800 and 1000 articles during his time as editor of the Daily Stormer, he is only being charged for a single article, which targets Jews.

“Antisemitism is a reprehensible, deadly force, and it is far from the only form of hatred that Sohier -Chaput has espoused,” continued Lakoff. “It is mind-boggling that Sohier-Chaput is only being charged for one article, while his writing has applauded violence against people of colour, Muslims, queer folks and women for years.”

Recent mass shootings in the USA such as the ones in Buffalo or Pittsburgh have shown us that antisemitism,white supremacy and Islamophobia often combine as a deadly cocktail. And the toxic ideas that Sohier-Chaput espoused have led to too much bloodshed.

“While antisemitic and white supremacist violence has broken the hearts and bodies of so many communities, we must come together to stop future attacks,” says Lakoff. “Jews, Muslims, Palestinians, Arabs, Black folks, queer and trans folks have been the targets of neo-Nazis like Zeiger, but we can also be powerful allies in stopping fascism once and for all”.

Prior instances of the charge of promoting hatred under the Criminal Code have shown it to be difficult legally. And ignoring all of the other toxic activity of this man may make it more so.

“If the court decides Zeiger is not guilty, that is far from a vindication,” says Lakoff. “IJV will continue to support anti-fascist organizing against antisemitism and racism”.

To recall, Sohier-Chaput participated in the infamous Charlottesville alt-right riots in 2018, which saw hundreds of fascists chanting racist and antisemitic slurs, and led to the death of anti-fascist activist Heather Heyer. Anti-fascist activists will be demonstrating outside the Palais de Justice today during the trial, beginning at 11am. A member of IJV-Montreal will be giving a speech at the rally.