Stop the Pogroms Against the Mi’kmaq! 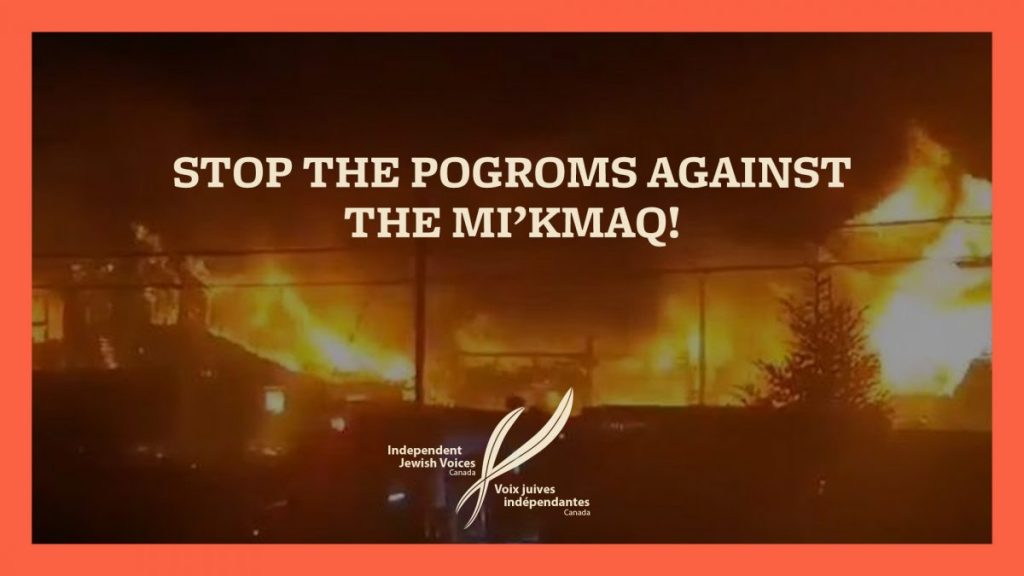 STOP THE POGROMS AGAINST THE MI’KMAQ

On September 29, Independent Jewish Voices Canada (IJV) expressed our support for the Mi’kmaq people and the Sipekne’katik First Nation currently engaged in a standoff in Nova Scotia to affirm their 260-year-old treaty rights to fish on their traditional territory. Our members have also participated in solidarity rallies.

As a Jewish group that stands for the human rights of the Palestinian people, we pointed out that the struggle of Mi’kmaq fishers bears important resemblance to the plight of fishers in the Israeli-occupied Gaza Strip.

Given subsequent developments, another analogy that comes to mind to us Jews is what our ancestors suffered in the late 19th and early 20th centuries, as victims of pogroms. Pogroms were terrorist racist riots, primarily in the Russian Empire, conducted mostly by civilians but tolerated, if not encouraged, by the authorities. Their purpose was to intimidate Jews and other minorities and keep them from participating fully in the societies in which they lived.

Events after the September 17 dropping of Mi’kmaq lobster traps into St. Mary’s Bay in southwest Nova Scotia have shown just how far certain non-Indigenous people will go in keeping indigenous people as second-class citizens. As well as the initial cutting of buoy lines, hauling up and stealing of Mi’kmaq traps, surrounding of Mi’kmaq boats, shooting in their direction with rifles and flare guns, and vandalizing of Mi’kmaq vehicles, commercial fishers or their supporters have now assaulted Mi’kmaq people, set fires and destroyed boats and two lobster pounds. They have also intimidated fellow commercial fishers who are attempting to reach a peaceful settlement with the indigenous fishers. Some say it is  terrorism, pure and simple.

Not only has the Federal Department of Fisheries and Oceans (DFO) dodged the issue for 21 years and still dithers; not only has the Nova Scotia provincial government refused to allow the legal sale of products from the indigenous fishery, but the actions (or inactions) of the RCMP have been shameful.

In the Wetʼsuwetʼen dispute of early 2020, that police force was quick to apply its considerable might to sequester indigenous protests against the Coastal GasLink Pipeline. But in the Nova Scotia fishery dispute, police presence has been bizarrely sparse, benign and lax. Assailants of the Mi’kmaq fishers claim to be concerned about harm to lobster stocks. But several researchers have shown that the science simply doesn’t support that argument and the fishing season regime is in place primarily for marketing, not for conservation reasons.

As with the pogroms of old, the main protagonists on both sides are not wealthy or powerful people. But wealthy and powerful forces sat in the background, growing richer and more powerful as the underlings clashed. The Nova Scotia fishery dispute, too, hides the fact that large fishing companies, like Clearwater, and the banks that finance fishing activity, profit mightily, while the fishers, both Indigenous and non-Indigenous in small coastal communities, risk life and limb in one of the most dangerous of occupations.

Independent Jewish Voices re-asserts our support for the Mi’kmaq fishers and condemns the pogrom of the commercial fishers and the inactions of the federal and provincial governments and the police. We call on the federal government to reach agreement with all indigenous peoples on their right to harvest the land and the sea. We call on the provincial government to allow the legal sale of the produce of aboriginal fishery. We denounce the RCMP for having failed to protect the Mi’kmaq fishers and their families going about their business.

Moreover, we call on our members and supporters, as well as other Jewish organizations, to support the Mi’kmaq in ways that have been outlined by the Sipekne’katik First Nation.