To Avoid a COVID-19 Crisis in Palestine, Israel Must Immediately End the Siege of Gaza 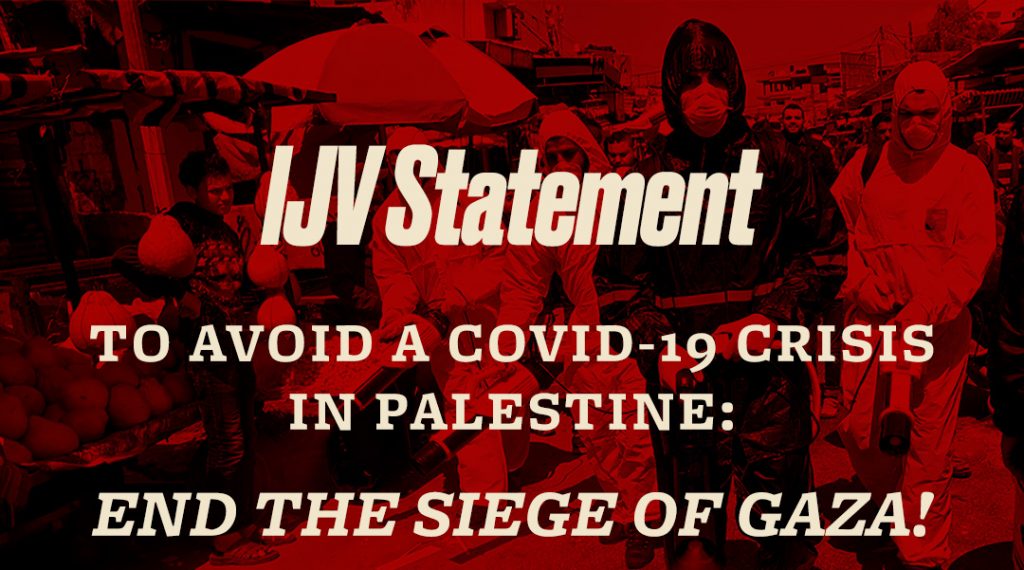 Independent Jewish Voices Canada is calling on the Canadian government and civil society to put the utmost pressure on Israel to end its siege on the Gaza Strip and alleviate travel restrictions in the occupied West Bank, which threaten the Palestinian healthcare system and could lead to a severe outbreak of COVID-19.

According to the World Health Organization (WHO) there have been 335 confirmed cases of COVID-19 and 2 deaths in the occupied Palestinian territory (oPt), including 17 cases in the besieged Gaza Strip, as of April 23rd. While these numbers may seem small compared to elsewhere, it is important to remember that Israel’s border restrictions and siege on the Gaza Strip have effectively decimated hospitals and healthcare systems in Palestine and deprived them access to essential equipment and other resources.

Gaza has already run out of the 200 Coronavirus test kits Israel allowed to enter the besieged territory in March. Since then, the Israeli Defense Minister, Naftali Bennett, has ordered a total halt to COVID-19 testing in Gaza. Meanwhile, there are currently only 96 ventilators available to cover Gaza’s approximately two million residents, or roughly 1 for every 20 thousand residents. By contrast, Israel has 2 800 ventilators for a population of nearly 9 million, or roughly 1 for every 3 thousand residents.

Meanwhile in the West Bank, since 2006 patients and hospital staff must apply for Israeli-issued permits in order to access the main specialized hospitals in East Jerusalem. These permits are difficult to obtain for many. Equally troubling is that ambulance access in the West Bank has been severely curtailed by the Israeli military, making the transfer of patients affected by COVID-19 to hospitals potentially very difficult.

Sadly, the Coronavirus has laid bare the systemic racism that Palestinians face at the hands of the Israeli government. Healthcare discrimination during the pandemic has also been evident against Palestinian citizens of Israel, who account for approximately 20% of Israel’s citizenry. As Palestinian-Canadian lawyer Diana Buttu has pointed out, “Israel had tested a mere 4,000 Palestinian citizens of Israel for the virus up to April 2nd. This is the same as the number of Jewish Israelis tested every day”.

As Khalil Abu Yahia, an English teacher and activist from Gaza City, has bluntly stated,“if you don’t put the maximum pressure on Israel to lift the siege right now, Gaza will become a graveyard”. There is an intense racism that maintains Israel’s blockade of the Gaza Strip, according to Abu Yahia: “the reason we’re suffering, and why we’re not getting proper treatment for the virus, is because we weren’t born to Jewish mothers. Think about it. If I, Khalil, had been born to a Jewish mother, my health might be better and I would have access to treatments.”

IJV stands with Khalil and millions of other Palestinians who are demanding the simple right to survive. We call on the Canadian government to demand that Israel urgently lift the siege on Gaza, and immediately end its illegal occupation of the entire oPt. Given the devastating reality faced by Palestinians, IJV encourages its members and supporters to donate to one of several  organizations and initiatives that are raising funds for urgent COVID-19 relief efforts in Palestine. Those currently accepting donations include the Palestine Medical Relief Campaign, the International Development and Relief Foundation, and Islamic Relief Canada.