Webinar: The Use and Misuse of Antisemitism Accusations in Canada 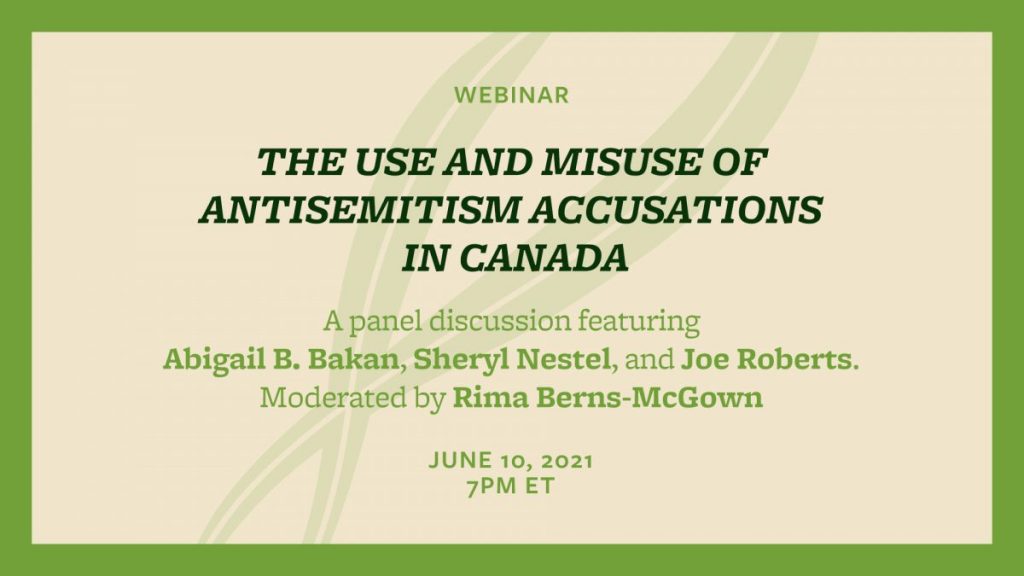 In the last month Israel’s grave human rights abuses have received unprecedented recognition and public condemnation in Canada. Across the country we have seen mass protests and demonstrations in many cities, statements by sitting MPs and senators, and the multiplication of calls for boycotts and sanctions. In response, the institutional Jewish community has linked these protests and condemnations to claims that there has been a significant rise in antisemitism, conflating the movement for Palestinian liberation with hatred towards Jews.

Complicating these claims are the isolated incidents of antisemitism which have taken place, some of which have been shown to be false, and others that can only be seen as verifiable instances of Jew-hatred.

How are we to understand the institutional Jewish community’s attempts to conflate a liberatory popular movement for Palestine with rising antisemitism? How is antisemitism being weaponized to push back against the growing movement for Palestinian liberation, and how can we work to counter this weaponization while standing steadfast against real antisemitism? What is the political strategy being used in this current moment to attack the Palestine solidarity movement, and how does that strategy rely on faulty assumptions and the structures of racism embedded in Canada? These are some of the questions this webinar will seek to address. IJV is proud to host experts from both academic and political backgrounds to engage these difficult but important topics. By discussing antisemitism, its history of weaponization in Canada, and our institutional Jewish community, the speakers will seek to gain a clearer insight of what is really happening, and what we need to do about it.

*Abigail B. Bakan is Professor in the Department of Social Justice in Education (SJE), at the Ontario Institute for Studies in Education (OISE) and a faculty affiliate with the Anne Tanenbaum Centre for Jewish Studies at the University of Toronto. With Yasmeen Abu-Laban, she is co-author of Israel, Palestine and the Politics of Race: Exploring Identity and Power in a Global Context.

*Sheryl Nestel, PhD, has been active on the Jewish Left for many decades . She lived in Israel between 1974 – 1988. She received her PhD in Sociology and Equity Studies from the University of Toronto in 2000 and taught there from 2000-2012. She regularly teaches community courses on Israel/Palestine and has been co-facilitating antisemitism training to academic and community groups since 2019. She has been a member of the National Steering Committee of Independent Jewish Voices Canada since 2012. She recently authored a research report titled: “The Use and Misuse of Antisemitism Statistics in Canada”

*Joe Roberts is a veteran political strategist in both the US and Canada, Executive Director of the Centre for Canadian Progress, Co-Host of the political podcast New Left Radio, and Managing Director at Jewish Currents Magazine. Roberts served as an executive in Jewish Federation system for over a decade in both the United States and Canada. Follow him on Twitter @Joe_Roberts01.The event will be moderated by Dr. Rima Berns-McGown, who holds a PhD in International Politics and currently sits as an NDP MPP in the Ontario legislature.