York School Board: Jewish and Palestinian Families Come Together to Stop Vote on Controversial Antisemitism Definition 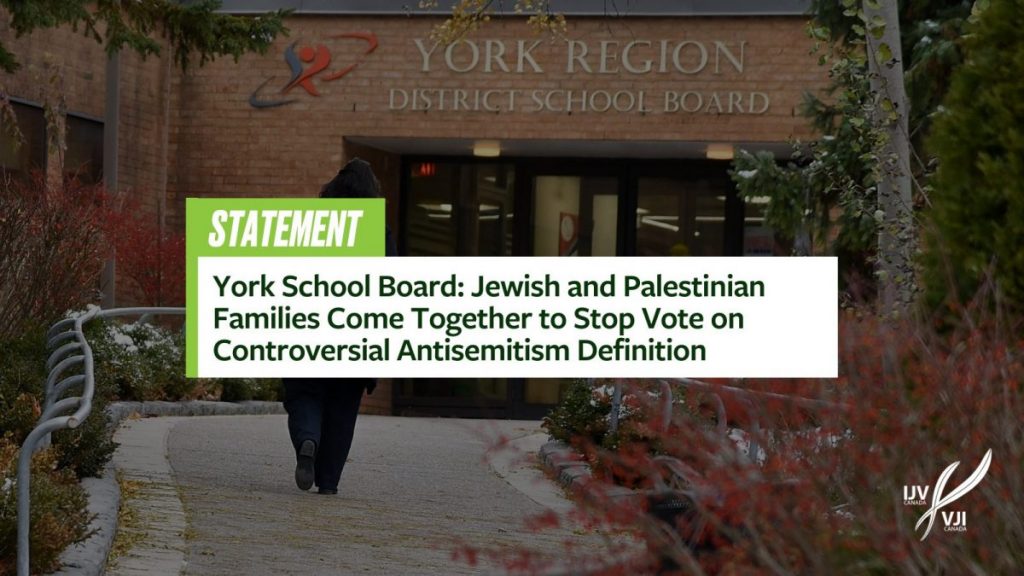 Far from protecting Jewish students, the IHRA definition has a proven track record of being used to silence Palestinian narratives, and for branding legitimate criticism of Israeli government policies as antisemitic. As soon as the community got word of the YRDSB vote on the matter, an ad-hoc coalition of Jews, Muslims, Palestinians and families from all walks of life came together to mobilize against it. During the YRDSB meeting on September 13th, it was revealed that over 500 emails were sent to YRDSB trustees on the motion, with two thirds writing to oppose the IHRA definition. This is an immense organizing victory, and shows us the power we have when we come together. The pro-Israel lobby pushed hard to have this definition adopted, which would have surely sown more division within the York region.

While the IHRA definition has been adopted as part of the federal government’s anti-racism strategy and by a small handful of provinces (though never through an open legislative process), it has also been decisively rejected by city councils in Montreal, Vancouver and Calgary, as well as by the Canadian Association of University Teachers and the University of Toronto. Kenneth Stern, the man who wrote the definition itself, has cautioned against the definition being adopted in academic spaces.

With the vote on the IHRA definition indefinitely postponed, we urge YRDSB to take the time to carefully consider their approach to fighting antisemitism. There are several better definitions of antisemitism to chose from which don’t conflate antisemitism with legitimate criticism of Israel and Zionism, including IJV’s own antisemitism definition, the Jerusalem Declaration and the Nexus Document. The YRDSB should indeed seek out effective tools to combat antisemitism. To that end, we urge them to learn from our Principles to Dismantle Antisemitism.

Antisemitism must be fought, but not by targeting those who simply advocate for Palestinian human rights. IJV thanks YRDSB trustees for hearing our voices, and we urge them to reject this definition should it ever come up for a vote again.