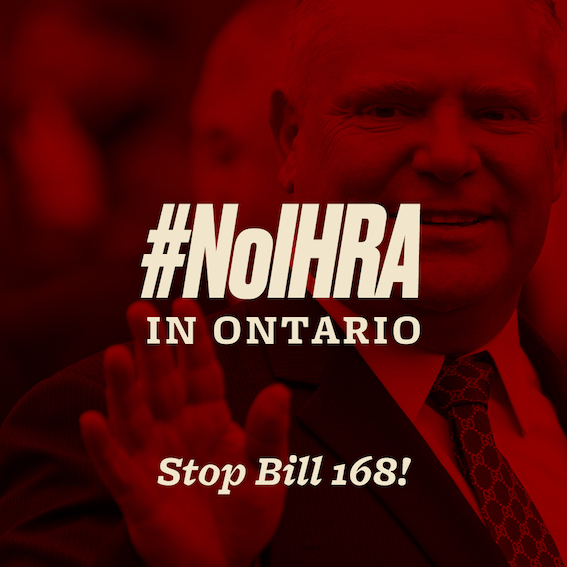 Toronto, February 25, 2020 – Independent Jewish Voices (IJV) is urging Ontario’s MPPs to reject Bill 168, the Combating Antisemitism Act, which would implement a controversial definition of antisemitism that has divided the Jewish community. Introduced as a private member’s bill by MPP Will Bouma in December, Bill 168 would require that Ontario be guided by the International Holocaust Remembrance Alliance (IHRA) working definition of antisemitism.

IJV firmly rejects the IHRA definition because it conflates antisemitism with legitimate criticism of Israel. As such, it represents a threat to the many Ontarians who support or work for Palestinian human rights, and to the freedom of expression of all in the province. Of the 11 examples of antisemitism listed in the IHRA’s working definition, 7 of them make specific mention of Israel. IJV argues that the definition itself is vague, while the examples given by the IHRA have been used to silence dissent regarding Israeli policies vis-à-vis Palestinians.

IJV is currently running a national campaign to challenge the adoption of the IHRA definition by public bodies across the country. Montreal recently became the third city in Canada to reject the definition following its adoption by the federal Liberal government as part of its “Anti-racism strategy” in June. Similar motions failed last year in both Vancouver and Calgary. This was due in part to the work of IJV members and allies in those cities who campaigned their local municipal councils to reject the IHRA’s dangerous definition.

Over the last year, there has been a groundswell of popular opposition to the IHRA’s definition. Kenneth Stern, who drafted the IHRA definition, recently denounced the fact that right-wing Jewish groups are weaponizing it in order to silence voices for Palestinian human rights. In Canada, over 300 academics so far have signed an open letter denouncing the IHRA definition, and cautioning against the effect it could have on academic freedom.

“The IHRA definition puts a gag on political expression, while breaking our united defense of the Jewish people against mounting anti-Semitism and the onslaught of white supremacy,” says Suzanne Berliner Weiss, a Holocaust survivor and member of Independent Jewish Voices Toronto. “Israel – like every other government – deserves our honest opinion of its actions, including its repressive and violent actions against the Palestinian people. No government is immune from criticism.”

IJV applauds all members of the Ontario Legislature who wish to do more to fight antisemitism. However, adopting the IHRA’s definition is wrong. We are urging MPPs to commit to combating antisemitism, but to vote against Bill 168 in the name of protecting free speech and an open debate on Israel-Palestine.