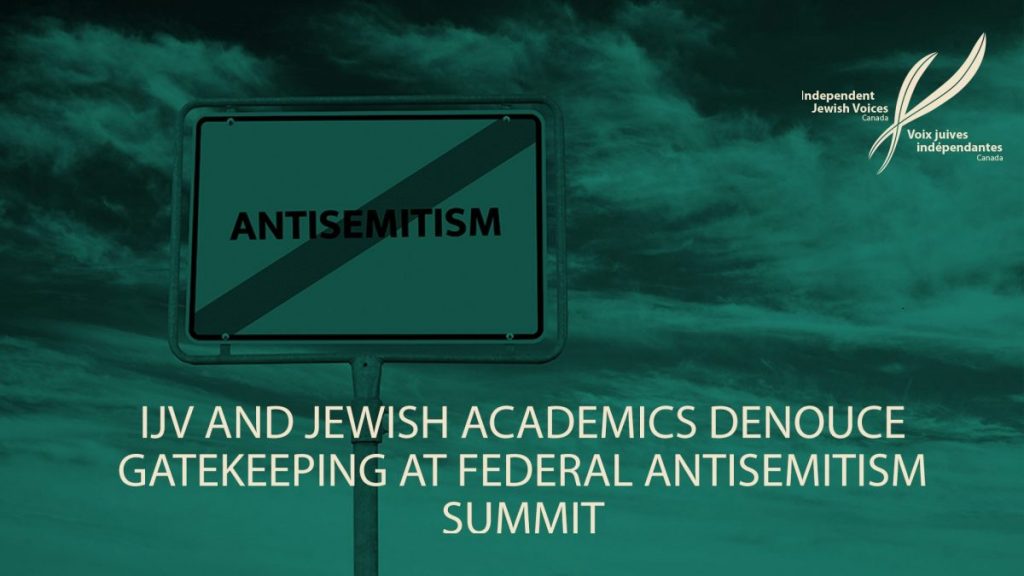 July 21, 2021 – Independent Jewish Voices Canada along with a group of Jewish scholars from Canadian universities are expressing outrage at the exclusion of critical voices from the National Summit on Antisemitism being held this afternoon by the federal Ministry of Diversity and Inclusion and Youth.

“Despite the minister’s insistence that ‘diverse’ perspectives will be represented, what we’ve seen has been quite the opposite,” said IJV national coordinator Corey Balsam. “The federal government’s decision to hand-pick which Jews it wants to hear from shows that it is not serious about fighting antisemitism, but is mainly interested in putting on a performance for electors prior to a widely rumoured fall election.”

Over 1500 IJV members and supporters sent emails to Minister Bardish Chaggar’s office insisting that IJV be included. Balsam even received an invitation to attend the summit from a Liberal MP, but this invitation appears to have been vetoed by the minister’s office. Insiders suggest that IJV is being explicitly shut out, along with others who are openly critical of the controversial International Holocaust Remembrance Alliance (IHRA) working definition of antisemitism, a tool that is expected to be strongly pushed at the summit.

IJV’s critical position on the IHRA definition has been supported or echoed by 650+ Canadian academics, 170+ Jewish Canadian faculty, 25+ Canadian university faculty unions and associations, and many other high-profile civil society groups. “The push for the adoption of the IHRA, is part of continued attempts to equate support for the Palestinian people with antisemitism,” said Balsam. “Although there were a handful of disturbing incidents following  recent Israeli violence in Gaza and Jerusalem, the protests that took place in solidarity with Palestinians overwhelmingly did not display anti-Jewish sentiments.”

As a member of the organizing committee for the Jewish Faculty Against IHRA letter, Professor Alejandro Paz (University of Toronto) and other organizers of the letter were also not admitted to the summit. “Despite organizing a letter signed by over 170 Jewish faculty from Canada and making repeated requests to the Minister, we did not even receive a reply,” said Paz. “By excluding critical Jewish scholars in this way, the federal government is allowing for the propagation of flawed statistics and questionable ideas, such as the so-called ‘new antisemitism’, which essentially equates strong criticism of the State of Israel with antisemitism.”

“If the federal government is serious about fighting antisemitism, it needs to hear from different Jewish perspectives on this issue, rather than admitting only a select group. And it needs to stop treating antisemitism separately from the fight against racism of all kinds, including anti-Black and anti-Indigenous racism, and, in this context especially, Islamophobia, anti-Arab and anti-Palestinian racism,” said Paz. Paz also pointed to a 2018 EKOS poll of Canadian Jews which showed that about half of Canadian Jews believe that accusations of antisemitism are often used to silence legitimate criticism of Israeli policies.

Despite being excluded, IJV has sent a submission to the ministry with several recommendations, including the adoption of an approach to fighting antisemitism that integrates it with the fight against other forms of racism. This approach would aim to unite targeted communities rather than divide them.