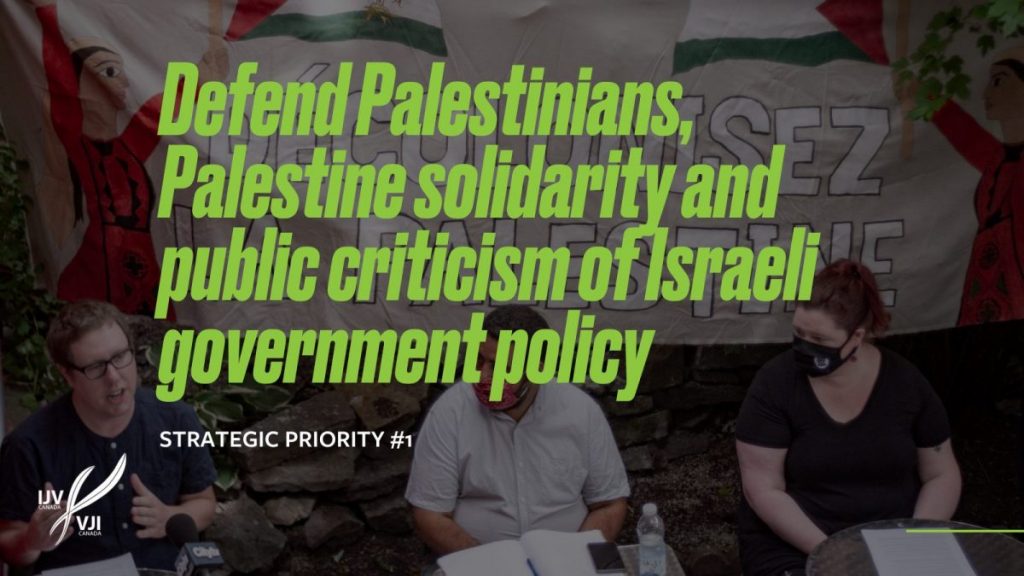 Independent Jewish Voices Canada (IJV) is a grassroots organization grounded in Jewish tradition that opposes all forms of racism and advocates for justice and peace for all in Israel-Palestine. Our strength comes from our members. IJV has active chapters in cities and on university campuses across the country.

IJV was established in 2008, bringing together 20+ progressive grassroots Jewish organizations across the country under one united banner. It has since grown dramatically, boasting 18 chapters, and over 1000 Jewish members and non-Jewish supporters. It is governed by a community-based volunteer Steering Committee and currently has 4 paid staff. IJV is now among the largest organizations that focuses on Palestine solidarity in Canada, and is the largest political and community-based organization on the Canadian Jewish left.

To stop the IHRA definition of antisemitism from being adopted, and to counter further attempts at branding Palestine solidarity as antisemitic, by governments and other institutions in Canada and internationally.

To increase the number of Canadians, and specifically Jewish Canadians, that support justice and human rights in Israel-Palestine.

To develop and build relationships with other organizations in Canada that align with our mission, principles and values.

To further advance the effectiveness and accountability of the organization’s Steering Committee, other committees and staff to our members, supporters, donors and allies.

We have bold plans for the next few years to build a winning movement against Israeli apartheid in Canada. We are fueled by love, passion, and a thirst for freedom and justice. If you want to join us in this exciting journey, become a member or supporter of IJV today.