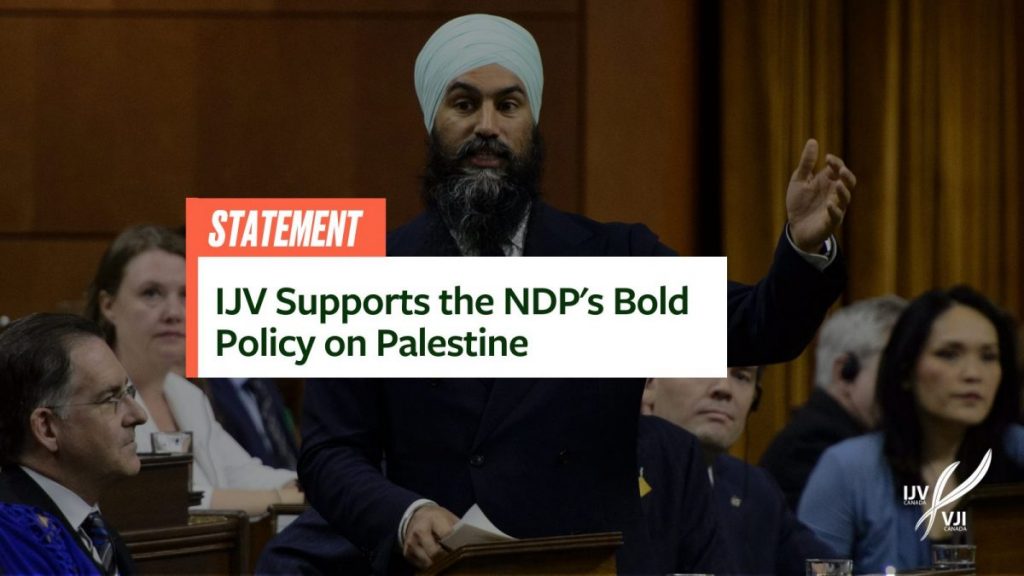 Independent Jewish Voices Canada (IJV) commends a recent strong shift in the federal New Democratic Party (NDP) which has seen it publicly making bolder calls for justice and peace in Israel-Palestine. Party leader Jagmeet Singh has circulated an email to his supporters which outlines 13 strong demands that the NDP is making on the Liberal government.

These demands include accepting the recommendations of human rights reports which have found that Israel is practicing apartheid against Palestinians, bringing the case of the slain journalist Shireen Abu Akleh to the International Criminal Court, and ending arms sales and trade with illegal settlements until Israel complies with international law. IJV fully supports all these demands, and we are encouraged by such a strong shift in the NDP at a time when it is needed the most in Palestine.

This new policy shift is a clear example that the party is responding to its membership base, which overwhelmingly supports Palestinian human rights. In April 2021, NDP members voted by a strong majority to support the “Palestine Policy” at the party’s policy convention. Points from this policy are directly reflected in Singh’s email and statements to the media on Palestine. Moreover, recent opinion polls suggest that a majority of Canadians (beyond just NDP supporters) want the government to be doing more to support Palestinian human rights.

In the last few years, many NDP members of parliament have been courageous and unafraid to declare their support for Palestinian liberation and their opposition to Israeli apartheid. Several NDP MPs have signed IJV’s Together Against Apartheid pledge, including NDP House Leader Peter Julian, Leah Gazan (Winnipeg-Centre), Matthew Green (Hamilton Centre), Gord Johns (Courtenay-Alberni) and Niki Ashton (Churchill—Keewatinook Aski). Several others have made statements explicitly calling out Israeli apartheid in recent months.

Following the launch of Amnesty International’s major report on Israeli apartheid in February, the Liberal government has failed to explain why it rejects the report’s findings. IJV condemns this total lack of moral clarity on the part of the government, and we commend NDP Foreign Affairs Critic Heather McPherson for holding Foreign Affairs Minister Melanie Joly’s feet to the fire on the issue.

While all of these developments certainly represent a historic step forward for the NDP, there is still much more the party could do to defend Palestinian freedom, and freedom of expression on Palestine in Canada. If the party is serious about these policies, it must also immediately reject the dangerous International Holocaust Remembrance Alliance (IHRA) antisemitism definition, which has been used dozens of times around the world (including in Canada) to silence Palestinians and human rights activists. Moreover, we also urge the NDP to endorse the Palestinian-led Boycott, Divestment and Sanctions (BDS) movement against Israeli apartheid.

History has shown that governmental efforts must also be coupled a strong citizens-led movements to bring down apartheid systems. In this sense, BDS provides a powerful, non-violent road map to a just peace in Israel-Palestine. Singh has previously disavowed BDS. Now would be a good time for him  to retract his previous comments and for the NDP to formally support this movement.