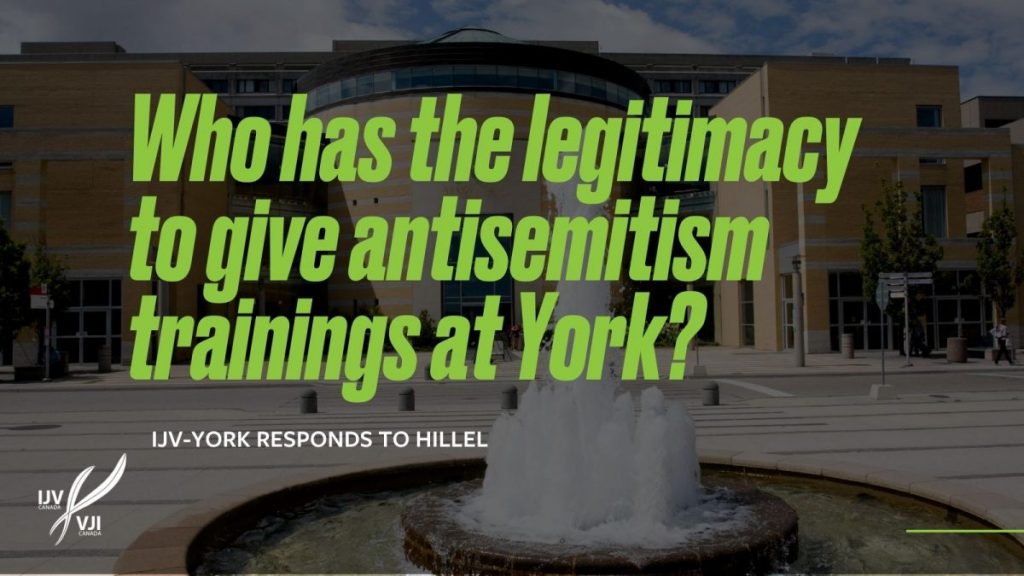 Re: Antisemitism training by Independent Jewish Voices (IJV) for members of the York Federation of Students (YFS).

On Monday, September 27th,  Hillel-York, a staunchly pro-Israel Jewish organization on campus, attacked the York Federation of Students (YFS) for not providing the antisemitism training they wanted.

Hillel-York demanded that the training be provided by facilitators that they specifically approved of, and not Independent Jewish Voices (IJV), who were invited to do it instead. IJV’s York chapter is pleased to learn that despite the manufactured outrage, the workshop went on without a hitch.

We cannot speculate as to why the YFS chose IJV instead of the facilitators recommended by Hillel, but it may be because Hillel requires its membership, and thus presumably the facilitators it would recommend, to support Israel, whereas IJV believes antisemitism can only be defeated by allying with other anti-racist movements, including those for Palestinian liberation.

Hillel publishes its own “Israel guidelines,” which argue it is “steadfastly committed to the support of Israel as a Jewish and democratic state with secure and recognized borders.” Hillel goes on to argue that Hillel will not partner with anyone who “denies” the right of Israel to exist as it is or that supports “boycott of, divestment from, or sanctions against the State of Israel”, silencing nearly every Palestinian, their advocates, and human rights activists worldwide, who want Israel to exist not “as it is” but as a place with equal rights for all.

Meanwhile, Human Rights Watch and B’tselem, two human rights organizations, have concluded that Israel is committing crimes of apartheid against Palestinians. Further, 48% of Canadian Jews believe that “accusations of antisemitism are often used to silence legitimate criticisms of Israel” (EKOS, 2018).

It would make no sense for the York Federation of Students, an organization dedicated to human rights and equality, to invite facilitators who seek to delimit the bounds of criticism of a racist state to lead an antiracism workshop. What Hillel does in its clubhouse is up to Hillel, but the YFS is a public organization, elected by the student body, responsible for ensuring proper training workshops are carried out.

We would also remind the York Administration that, like Hillel, they do not have jurisdiction over who the YFS chooses to run its workshops. As for the workshop being on Shemini Atzeret, none of those who were to receive the training objected.