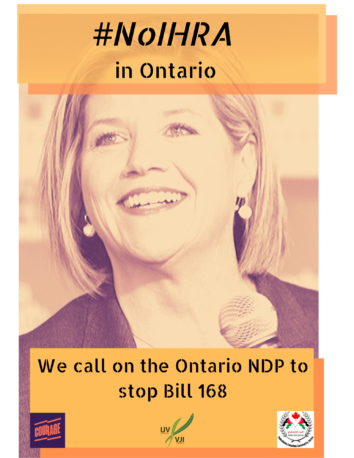 Three Canadian justice-seeking organizations will combine efforts on Saturday at the Ontario NDP Provincial Council to voice strong opposition to Bill 168, which aims to officially conflate antisemitism with criticism of Israel.

On February 27th, Bill 168 passed its second reading at Queen’s Park, with full support from both the Progressive Conservative Party of Ontario, and the ONDP. The IHRA definition failed to pass in Montreal, Calgary and Vancouver’s city councils. If passed in Ontario, this will be the first time it is adopted by a provincial or territorial government.

Independent Jewish Voices (IJV), the Courage Coalition and Palestine House, representing all together thousands of Ontarians, stand jointly opposed to this dangerous legislation, saying that it will actually promote racism and curtail civil liberties. They are deeply disappointed that the ONDP has lacked the courage to stand against it.

“More than 1300 people have sent letters to MPPs in the last three weeks pleading with them to respect our rights and reject Bill 168. So far they are being ignored. If the IHRA definition passes into law, it will pose serious threats to Jewish, Palestinian and progressive people across Ontario,” said Sheryl Nestel, a member of IJV Toronto.

More than 400 Canadian academics have recently signed a statement that decries the IHRA definition because:

“The ONDP has chosen to support Doug Ford, who is following in the footsteps of Donald Trump and Boris Johnson with Bill 168,” said Courage Coalition member, Darrah Teitel. “Many Courage members work to compel principled actions and policies from the NDP. We see this as a cynical and cowardly move by Andrea Horwath and her caucus. We want a party that stands up for human rights and against real antisemitism, not one that caves to pressure from right-wing forces.”

“It is disappointing to see the ONDP turn it’s back on the Palestinian people,” said Hammam Farah of Palestine House, the Palestinian Community Centre of Mississauga. “My people have long suffered under the Israeli regime and Canada has long been complicit in this. The Liberal and PC parties have never supported our rights, but to see the ONDP go in the same direction is disheartening. We will not stand for it.”

This Saturday, at the ONDP Provincial Council, Electoral District Associations and their constituents have the opportunity to raise their voices to support direct democracy within their party. Several EDAs have passed resolutions against the IHRA Bill and we expect to see these resolutions addressed by the council. This is important not only because of the harmful impacts this bill could have on Ontarians in general, but also because of the impacts it could have on the ONDP itself.