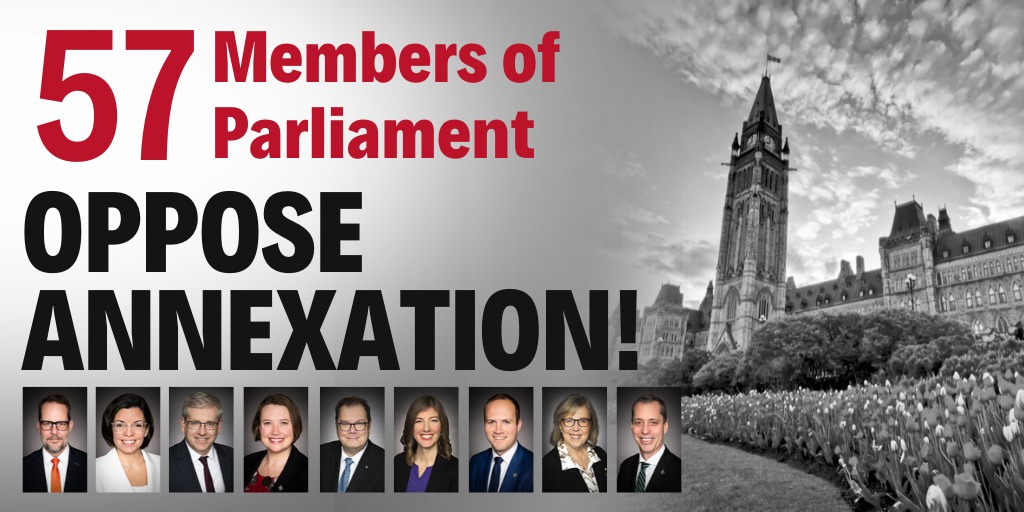 Tuesday 7 July 2020 – Canadian politicians representing nearly 60 Members of Parliament have signed a pledge calling on the government to “show meaningful opposition” to Israeli plans to annex portions of the occupied Palestinian territory. The pledge also called on the government to “consider all reasonable diplomatic and economic options to stop annexation and prompt Israeli compliance with international law.”

A total of 29 MPs have signed onto the pledge, including the foreign affairs critics of three out of four opposition parties, a few Liberals and one Independent. The number of MPs represented is expanded to 57, considering that three MPs affiliated with the Bloc Québecois–Stéphane Bergeron, Mario Beaulieu and Alexis Brunelle-Duceppe–signed on behalf of the entire Bloc caucus of 32.

The pledge is the product of an online email campaign launched by several high profile civil society organizations representing millions of Canadians, including the United Church of Canada, the Canadian Labour Congress, Mennonite Central Committee, the Canadian Federation of Students, the Canadian Union of Public Employees, the Public Service Alliance of Canada, Canadians for Justice and Peace in the Middle East and Independent Jewish Voices (IJV). Nearly 6500 Canadians have participated in the campaign thus far.

“This pledge should send a strong message to the Trudeau government that words are not enough and that serious action is required,” said Corey Balsam, IJV National Coordinator.

Trudeau has expressed that his government opposes annexation, but has yet to announce any measures to either dissuade or punish Israel if it proceeds. As recently as in May, Trudeau discussed strengthening relations with Israel and building on the Canada-Israel Free Trade Agreement (CIFTA), which includes settlements in the occupied West Bank that Israel intends to annex.

“If Canada is serious about its opposition to annexation, it needs to do something about it,” said Balsam. “The Trudeau government has imposed sanctions and spoken out forcefully against Russia for annexing Crimea. It would only be consistent for it to act in a similar way with respect to Israel.”

Canadian MP signatories join hundreds of European politicians who have signed on to statements opposing annexation, including a letter signed by 130 UK MPs calling on the Johnson government to “make clear publicly to Israel that any annexation will have severe consequences including sanctions.” Palestinian civil society has also called for sanctions.

A recent IJV-sponsored EKOS poll showed that 74% of Canadians want the government to express opposition to Israeli annexation, and 42% want to impose economic and/or diplomatic sanctions should Israel’s plan proceed.

The MP Pledge campaign is still open for signatures.

“It’s not too late for MPs to stand on the right side of history, concluded Balsam, “but the window may soon close.”