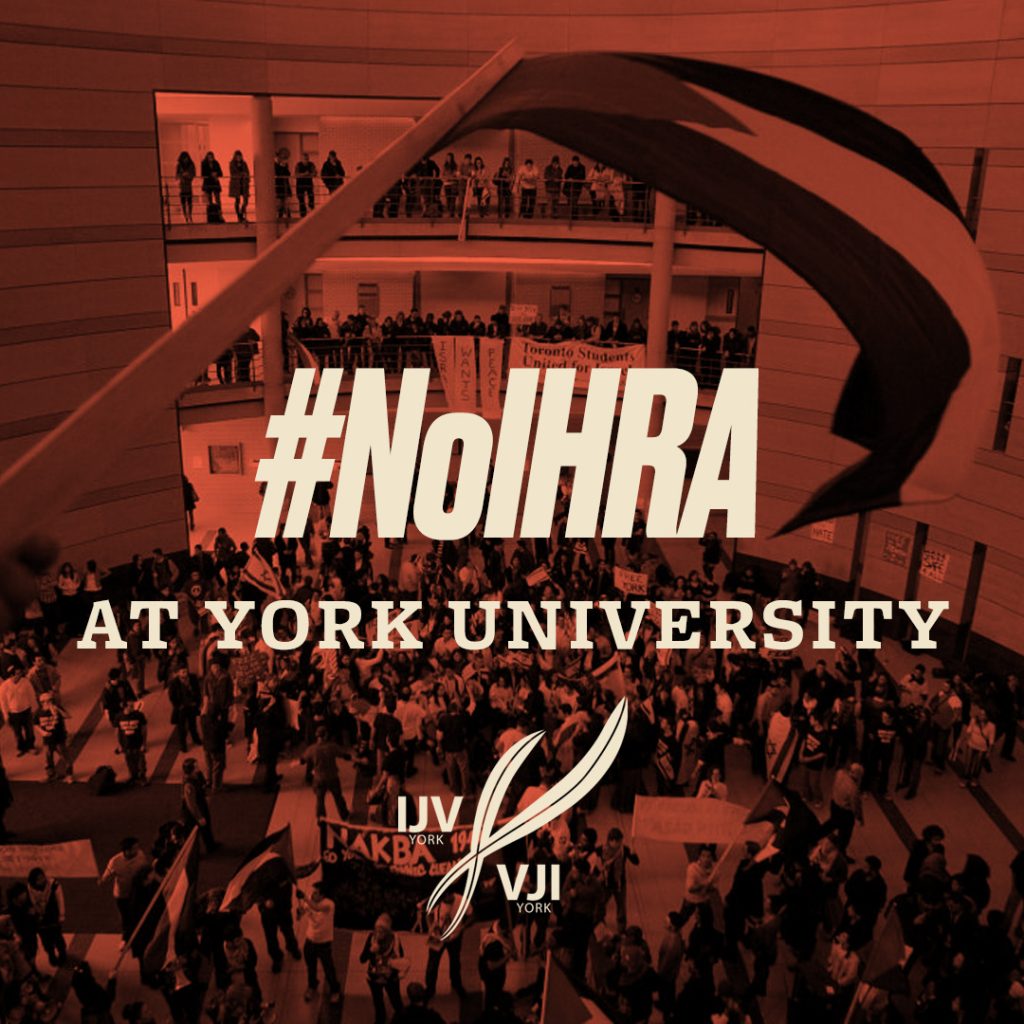 On November 20, 2019, Palestinian students and their allies at York University in Toronto held a rally to oppose the presence of Israeli soldiers at an event on campus. A tense situation ensued when members of the Jewish Defense League (JDL), an FBI-labelled terrorist group, showed up to instigate fights with participants in the demonstration. In the aftermath of the event (which garnered national news headlines), the university launched an independent review, headed by former Supreme Court Justice Thomas Cromwell. Justice Cromwell published his report in April, which outlines a series of recommendations, including that the university “consider” implementing the International Holocaust Remembrance Alliance (IHRA) definition of antisemitism. IJV, along with more than 400 Canadian academics, stands firmly against this definition because it conflates antisemitism with legitimate criticism of Israel.

Today, IJV’s student chapter at York sent an open letter to university President Rhonda L. Lenton urging her to not adopt the IHRA. Please read their full letter below, and find out more about our campaign at noihra.ca.

Re: Why York should not adopt the IHRA definition of antisemitism.

We hope this letter finds you and yours well, especially in these unprecedented times.

We, the Jewish students at Independent Jewish Voices – York (IJV-York), are contacting you regarding the Cromwell Report of June 2, 2020, and specifically, its recommendation that York “consider” adopting the IHRA definition of antisemitism.

IJV-York considers the IHRA definition of antisemitism to be inappropriate in any setting, but especially at our university. The IHRA definition conflates antisemitism with legitimate criticism of Israel and represents a threat to any York student, of any nationality, who supports or works for Palestinian human rights. Of the 11 examples of antisemitism listed in the IHRA’s working definition, 7 of them make specific mention of Israel. IJV argues that the definition itself is vague, while the examples given by the IHRA have been used to silence dissent regarding Israeli policies vis-à-vis Palestinians.

So far, no university administration in Canada has adopted the IHRA definition of antisemitism, because it so clearly stifles free speech. Over 400 Canadian academics, about a tenth of them affiliated with York, have publicly opposed the IHRA. The City of Montreal chose not to adopt the resolution, in January, following Calgary and Vancouver. It is stalled in the Ontario legislature. Were the IHRA to be adopted, tabling in favour of Palestinian human rights could be disallowed. Palestinian students could be forbidden from advocating for their families and friends. The sort of demonstrations we’re seeing right now in Israel against West Bank annexation could be banned.

IJV-York believes antisemitism and hate speech have no place on our campus. The IHRA definition, unfortunately, would not protect York’s Jews from hatred. Rather, it would have a chilling effect on legitimate dissent and human rights advocacy. The Cromwell report urged York University to permit any events that were not hateful or violent. The IHRA would do the exact opposite, and repress non-hateful, non-violent speech.

We appreciate that you spoke directly to the Jewish community at York in your letter of June 2, 2020, to reassure us that York is concerned with fighting antisemitism. As York Jews, we agree that antisemitism is a serious issue. But the IHRA is emphatically the wrong way to deal with it.

Thank you for your time and consideration. Please feel free to contact us below for more information or to discuss this issue further.