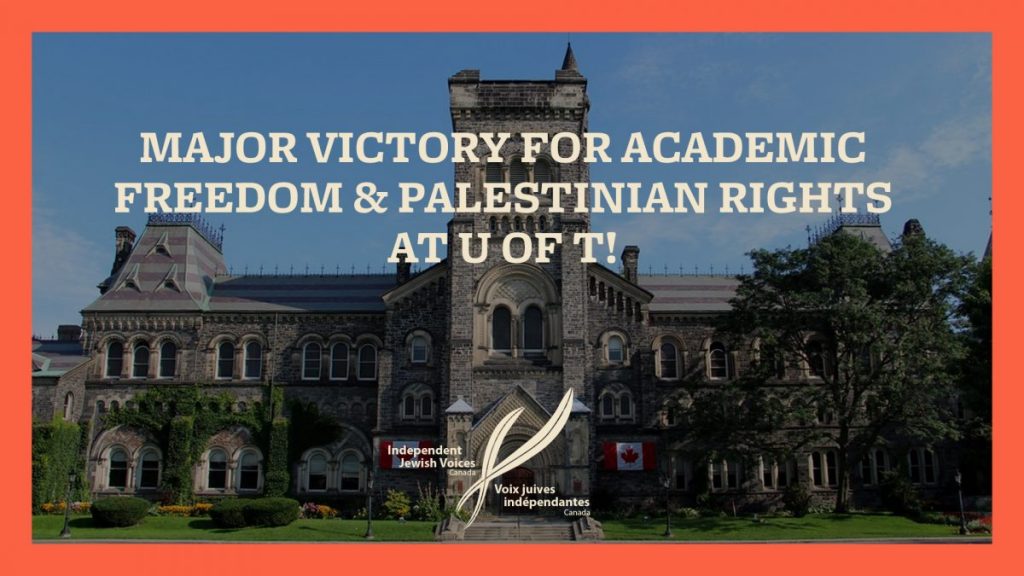 September 17, 2021 – Independent Jewish Voices Canada (IJV) is celebrating the news today that the International Human Rights Program at the University of Toronto’s Faculty of Law has just reinstated its job offer for director to Dr. Valentina Azarova. Dr. Azarova’s informal offer of employment was shamefully rescinded in September 2020 after a sitting tax judge, Justice David Spiro, cautioned the university against hiring her due to her research and academic work on Palestinian human rights. Justice Spiro is a former board member of the Centre for Israel and Jewish Affairs (CIJA) and a major donor to the UofT law faculty.

“Today’s news that Dr. Azarova’s job offer has been reinstated is a massive victory for academic freedom and Palestine solidarity at the University of Toronto, and across Canada,” says Corey Balsam, IJV’s national coordinator. “This case became a lightning rod for academic freedom and the silencing of Palestinian voices both in Canada and around the world, and it’s great to see if finally resolved.”

The Azarova Affair came amidst a global push for universities, governments and other institutions to adopt the International Holocaust Remembrance Alliance (IHRA) working definition of antisemitism, widely criticized for conflating support for Palestinian human rights with antisemitism. “Although the IHRA definition was not explicitly linked with this case, it has contributed to the growing sense of chill around criticism of Israel that we believe allowed this incident to transpire in the first place,” said Balsam. Thus far, over 650 Canadian faculty, over 170 Jewish-Canadian faculty, and nearly 30 faculty associations and academic unions in Canada have gone on record opposing the adoption of the IHRA definition on their campuses.

IJV salutes the Canadian Association of University Teachers (CAUT), which issued a rare censure of UofT earlier this year. As a result, over 1000 academics pledged to cancel their speaking engagements and refused to lecture at UofT in solidarity with Dr. Azarova and CAUT. The CAUT has now decided to put its censure on pause as a result of this victory, pending a vote on lifting the censure at CAUT’s Council meeting in November.

IJV has been involved in supporting academic freedom at UofT since the beginning of this scandal. In October 2020, we filed a formal complaint against Justice Spiro with the Canadian Judicial Council (CJC) along with several other allied groups, arguing that he be sanctioned for his behaviour, which appears to have been motivated by anti-Palestinian racism. The CJC review found that although Justice Spiro knew it was wrong to interfere in the hiring of Dr. Azarova, he still used his influence as a donor, a judge and former director of CIJA to warn UofT that his community would disapprove of Dr Azarova’s scholarship upholding Palestinian rights. Despite the CJC coming to this conclusion, they also concluded that Justice Spiro’s actions had no impact on the decisions of the university to not hire Dr. Azarova. In July, IJV was one of six organizations who applied to the Federal Court for a judicial review of the CJC’s decision. That case is still before the court.