Fearmongering & Gatekeeping: A Critical Analysis of the National Summit on Antisemitism 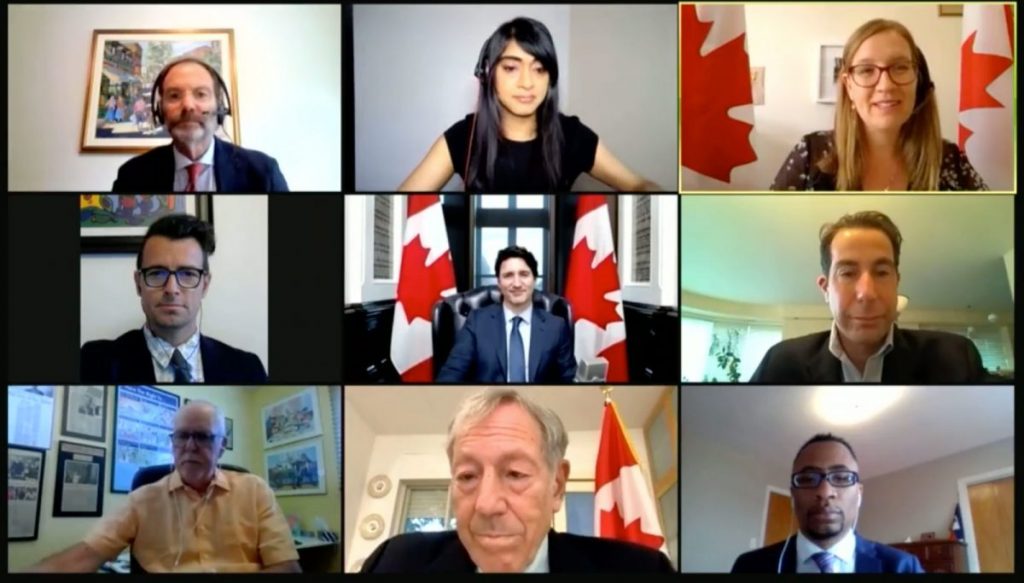 On Wednesday, July 21 2021, the federal Ministry of Diversity, Inclusion and Youth hosted an emergency online “summit” on antisemitism with a carefully-selected audience in attendance. The government agreed to the summit at the behest of Jewish establishment organizations and Irwin Cotler, former Minister of Justice and current Special Envoy on Preserving Holocaust Remembrance and Combatting Antisemitism.

Independent Jewish Voices Canada (IJV) was excluded from the summit, as were representatives from the group of over 160 Canadian Jewish academics who signed a recent letter opposing the controversial International Holocaust Remembrance Alliance working definition of antisemitism (IHRA-WDA), adopted by the Liberal government in June 2019.  Moreover, leaders of the federal opposition parties also expressed disappointment for having not been invited.

IJV originally received an invitation through the intervention of a member of the Liberal caucus. A confirmation email from the minister’s office with Zoom login details was to follow, as it had for other invitees. Except that in IJV’s case, it didn’t. Sources within the Liberal party informed us that our invitation had seemingly been blocked by summit organizers.

Apart from a few short public sessions, the summit was closed to the public, ostensibly to create a ‘safe space’ for community members. Thanks to recordings and subsequent transcriptions from those who were able to attend, we were able to discern the main thrusts of what was raised. These transcripts reveal a carefully stage-managed event and one in which certain clear messages would emerge untarnished by disagreement. Below are some of the arguments presented at the summit, accompanied by short responses:

IJV response: There is certainly evidence of a rise in antisemitic incidents worldwide. However, we question the government’s uncritical acceptance of the methodologically unreliable “B’nai Brith Canada Annual Audit of Antisemitic Incidents.” B’nai Brith, CIJA and other groups in the Jewish community equate strong criticism of Israel with antisemitism, a stance that has been disputed by some of the most respected Jewish and Holocaust Studies scholars in the world. Equating criticism of Israel with antisemitism deflects attention from the link between antisemitism and the general rise of bigotry and white supremacism as well as equating Jews indelibly with the state of Israel.

IJV response:  All Canadian ethnic and religious groups must be free to conduct their personal and communal affairs without external attack, discrimination and humiliation. However, the question of Israel, its role in the world and its treatment of Palestinians, is a political question and must be subject to open, and rigorous, public debate, as painful as this might be to Jewish advocates for Israel.

IJV response: If there is a predominant message emerging from the Summit, it is the demand for adoption and enforcement of the IHRA-WDA. There is wide-spread opposition in Canada and elsewhere to the adoption and implementation of the IHRA-WDA which has proven to be a mechanism for the suppression of speech on Palestine, particularly on university campuses.

IJV response: Proponents of this claim insist that antisemitism stands on its own because it is global in scope, timeless, and the only hatred coming from across the political spectrum. IJV, on the other hand, sees antisemitism as a contingent bigotry, closely linked to other forms of hatred and white supremacism. Posing antisemitism as an exceptional form of hate isolates Jews from other anti-racist struggles and precludes the possibility of solidarity with racialized groups experiencing hate.

IJV response Despite ample evidence of growing right-wing white supremacism and its embrace of antisemitism, pro-Israel groups continue to insist that the pro-Palestine left is the main source of antisemitic activity. This view is based entirely on the conflation of strong Israel criticism with antisemitism, which IJV and many other Jewish groups categorically reject. Indeed, forty-eight percent of Jewish Canadians polled agree that charges of antisemitism are often used to silence critics of Israel.

IJV response:  This is an ad hominem statement that ignores the fact that Jewish activists and scholars have made important contributions to the discussion of Jews’ position in western societies. More importantly, this sentiment reflects a belief that Jews belong solely in the category of the oppressed rather than an understanding that Jews can be both oppressed by antisemitism AND privileged by factors such as race and class.

IJV response:  Jews do not all agree on what constitutes antisemitism and different Jewish communities and individuals express very different experiences in relation to antisemitism. Jewish establishment organizations claim to reflect the “majority,” but many members of the Jewish community are not represented within these institutions and a significant number disagree with their position that challenges to Israel and Zionism equate with antisemitism.

IJV response:  We concur with the statement in the Jerusalem Declaration on Antisemitism that:

“Criticizing or opposing Zionism as a form of nationalism, or arguing for a variety of constitutional arrangements for Jews and Palestinians in the area between the Jordan River and the Mediterranean [does not constitute antisemitism in and of itself]. It is not antisemitic to support arrangements that accord full equality to all inhabitants “between the river and the sea,” whether in two states, a binational state, unitary democratic state, federal state, or in whatever form.”

IJV response: While the Holocaust should be a key component in any discussions of bigotry, there are other important instances of genocide – historical and contemporary – that need to be discussed as well. In a multicultural society, the Holocaust must be an important part of the discussion of genocide and ethnic cleansing, but we also must acknowledge that living amongst us are those who have been impacted by other catastrophic events that have deeply affected racial and ethnic groups worldwide. We must identify the common origins and elements of these crimes against humanity in order to prevent their recurrence and in order to build solidarity among ethnic groups in the fight against hatred.

IJV’s overall response to the summit

IJV is most concerned with the zealous and unanimous calls made at the federal antisemitism summit to impose the IHRA-WDA on Canadian institutions at all levels. This was advocated most aggressively by the pro-Israel Jewish organizations that dominated the event. There is, however, no consensus among Jews about the IHRA-WDA or what constitutes antisemitism.  Both Jewish and non-Jewish critics worldwide have argued that by equating harsh criticism of Israel with antisemitism, the IHRA-WDA is intended to silence the growing global sentiment against Israel’s violations of Palestinian human rights. Concerns that the IHRA-WDA will curtail academic freedom and campus political speech have been widely expressed and this has indeed been the case in many countries. Nearly 30 Canadian faculty associations and academic unions have adopted resolutions against the IHRA WDA. Over 650 Canadian academics have signed a statement rejecting the adoption of the IHRA on university campuses as have 165 Jewish academics. These voices were intentionally omitted from the antisemitism summit.

Moreover, Jewish organizations that were featured prominently at the summit, including CIJA, B’nai Brith Canada and Friends of the Simon Wiesenthal Centre do not, by any means, represent the views of the entire Canadian Jewish community. The intentional exclusion by the federal government of Jewish organizations, scholars and public intellectuals who disagree with the political goals of these groups guaranteed that no mention would be made of the widespread criticism of the IHRA-WDA and no acknowledgement would be made of political disagreement within the Canadian Jewish community. This is completely unacceptable in a democratic society.

Recent polls confirm that nearly half of all Jews in Canada have no affiliation with the institutional Jewish community and any claim by CIJA and others to be their representative must be regarded as unsubstantiated. We know that between 30% and 50% of Canadian Jews have a negative opinion of the Israeli government while the groups who dominated the summit are known to support Israel uncritically. Forty-eight percent of Jewish Canadians also believe that accusations of antisemitism are often used to silence legitimate criticism of Israel – a key objective of the IHRA-WDA. Importantly, many major Jewish groups have issued statements rejecting the IHRA-WDA including: The New Israel Fund, J Street, Reconstructionist Judaism, Americans for Peace Now and the rabbinical human rights group T’ruah. Reform Judaism, the major denomination in the U.S., rejects adopting the IHRA WDA for legal purposes.

Substantial evidence recently brought forward by respected human rights organizations has shown that the Israeli state is an apartheid regime. Almost simultaneously, massive protests erupted worldwide in May in the wake of Israel’s disproportionally deadly attacks on Gaza and its arrests of hundreds of Palestinian protesters both inside Israel and in the occupied Palestinian territory. Many commentators agree that Israel is losing the battle to be seen as a moral actor. It is not surprising then, that defenders of Israeli policy have a vested interest in equating criticism of Israel with antisemitism in order to silence Israel’s critics.  By favouring and encouraging those Jewish organizations that are lobbying for the implementation of the IHRA-WDA in workplaces, schools and universities, local and provincial governments and in civil society in general, the federal government lends its hand to the longstanding injustices suffered by Palestinians by silencing those voices that call attention to this intolerable state of affairs.