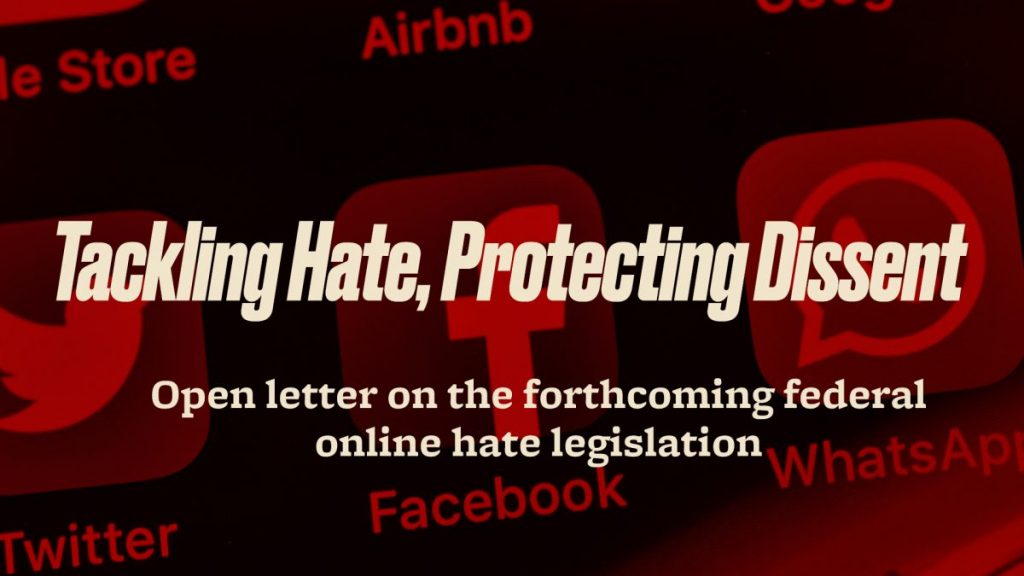 As organizations committed to the defence of human rights, civil liberties, and the eradication of discrimination, we know first-hand that online hate presents a growing threat to people in Canada. We have seen web-based platforms and social media applications become breeding grounds and organizing spaces for the most vile oppressive groups, consistently falling short of blocking blatantly racist, antisemitic, or otherwise hateful content.

We appreciate that the government of Canada is taking the problem seriously and tabling new legislation to address online hate. This is an important step that will help bring existing hate speech legislation into the 21st century. However, a clear line must be drawn between bona fide hate speech and legitimate forms of dissent and protest. We are particularly concerned with where that line may fall between clear instances of antisemitism, on one hand, and criticism of the state of Israel, on the other.

There is a concerted effort by some groups to blur this line. In lockstep with the Israeli government, pro-Israel advocacy organizations in Canada are urging Canada to connect the deeply flawed and widely rejected International Holocaust Remembrance Alliance working definition of antisemitism (IHRA-WDA) with this new online hate legislation. The IHRA definition represents a direct threat to protected freedom of expression because it conflates criticism of Israel and Zionism with antisemitism – for example, by falsely branding as antisemitic the claim that “the existence of a state of Israel is a racist endeavour”. Moreover, as numerous cases have illustrated, the IHRA definition has been weaponized in several countries to attack or silence persons or organizations that dare speak out against Israeli human rights violations.

We note that the Jewish community is deeply divided on this issue. There are now several other definitions being proposed by Jewish organizations which make a point of carefully distinguishing criticism of Israel from antisemitism, in contrast to the IHRA definition. Several prominent individuals and organizations both in Canada and around the world have furthermore warned against adopting this definition and its accompanying list of illustrative examples, and/or codifying it into law, including the Reform movement, the largest Jewish denomination in North America; the Canadian Labour Congress; the Canadian Federation of Students; the Ontario Confederation of Faculty Associations; over 600 Canadian academics; over 150 Jewish Canadian academics, 21 Canadian academic unions and associations; 122 Palestinian and Arab intellectuals, a broad coalition of progressive Zionist organizations; and even Kenneth Stern, the lead drafter of the definition himself.

In August 2020, several organizations, including the Canadian Civil Liberties Association, the BC Civil Liberties Association, the Centre for Free Expression at Ryerson University, and Independent Jewish Voices Canada were invited to participate in consultations with the federal Department of Justice to discuss the best methods for combating online hate. In their submissions to the Minister and Parliamentary Secretary, these organizations asserted that while it is imperative to rigorously condemn antisemitism in all its forms, the federal government must not do so by conflating criticism of Israel with antisemitism.

Let’s tackle online hate, but let’s do so while protecting our Charter-protected freedoms of thought, belief, opinion and expression. We stand firm in this position and we urge you to do the same by not adopting the IHRA definition of antisemitism into online hate legislation or any accompanying interpretative guidelines and affiliated policies.

The Coalition of Canadian Palestinian Organizations