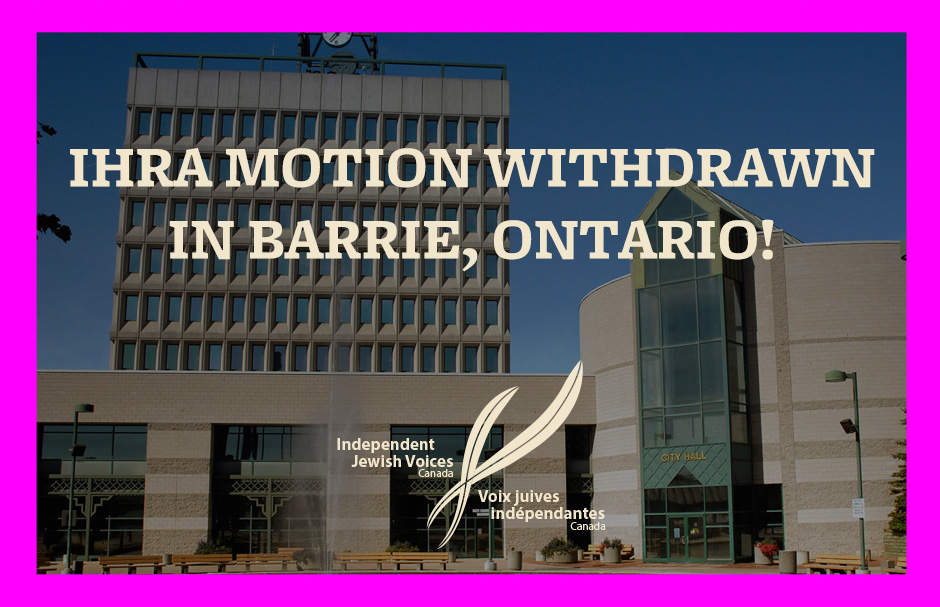 Motion 8.2, Adoption of the International Holocaust Remembrance Alliance (IHRA) Definition of Antisemitism was due to be voted on by Barrie City Council on Monday evening. However, he withdrew it Monday afternoon on account of uproar by concerned Canadians, including many Barrie residents.

Barrie now joins several major Canadian cities which have considered adopting the IHRA definition, but have either had the motions withdrawn or defeated, including Montreal, Vancouver and Calgary. IJV rallied significant grassroots opposition in all four of these cities. Well over 100 IJV members and supporters sent letters to Barrie city councillors urging them to vote against this particular motion.

“This is another major victory for all who oppose antisemitism and support Palestinian human rights,” said Corey Balsam, IJV’s National Coordinator. “We strongly believe that our safety as Jews is intimately tied with the safety and well-being of other communities targeted by hate and bigotry, and that includes the Palestinian people. We congratulate the City of Barrie for its decision to abandon the IHRA’s problematic definition and strongly encourage other cities and provinces in Canada to follow suit.”

IJV is concerned with recent examples of antisemitism and racism in Barrie, including swastikas being spray-painted on a public playground earlier this summer. However, we strongly believe that the IHRA does little to curb antisemitism, and instead is primarily geared towards shutting down activism in support of Palestinian human rights.

“Barrie, like the rest of Canadian society, is absolutely due for a hard discussion about racism,” says Dan Freeman-Maloy, an IJV member originally from Barrie who wrote a powerful open letter to Mayor Lehman and Barrie City Council. “Abandonment of the offensive, counter-productive IHRA definition of antisemitism will hopefully be one of many steps in the right direction. Those of us with long-established links to Jewish life in Barrie — and people of conscience of all backgrounds — should agree that Palestinians deserve the same freedoms as everyone else, including the freedom to speak freely against the crushing oppression they face from the Israeli government without facing smears.”

While backers of the IHRA definition have tried to present it as innocuous and legally non-binding, they have also attempted to weaponize the definition in order to shut down freedom of expression in relation to  Israel-Palestine. Recently, an attempt was made to pass the IHRA at the University of Toronto in order to stifle the non-violent Boycott, Divestment, and Sanctions (BDS) campaign on campus. And in a bizarre ironic twist, B’nai Brith Canada jumped on comments made by York University professor Faisal Bhabha in a debate on the legitimacy of the IHRA itself to urge the university administration to punish him by revoking classes.

Opposition to the IHRA definition has become increasingly widespread around Canada, and throughout the world. Kenneth Stern, the original author of the definition now used by the IHRA, has denounced the fact that right-wing groups are weaponizing it in order to silence voices for Palestinian human rights, including Jewish students and faculty. In Canada, over 400 academics have so far signed an open letter denouncing the IHRA definition, and cautioning against the impact it could have on academic freedom.

IJV’s objections to the IHRA re-definition are detailed in its recent report, in which it deconstructs the definition line by line and warns of the dangerous consequences of its adoption both for the fight against antisemitism and the movement for Palestinian human rights.

Currently there is a private member’s bill before the Ontario legislature that would implement the IHRA definition at the provincial level where it has thus far passed second reading.